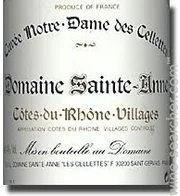 I first opened a bottle of the 1998 Notre Dame des Cellettes, but, alas, it was corked. This 2000 has always shown better than the 1998, and it is still showing well tonight, although it is clearly fully mature.

Plenty of sediment that has not formed a crust, and that makes the wine's appearance less bright than previous bottles. Still a deep crimson/ruby, though. Mellow red fruit smells and flavors; mostly Grenache strawberry. Also some Mourvedre violet scents. Mellow and mouth filling. I still have another bottle or two and will be drinking them soon.

Posted by Fred McTaggart at 7:00 PM