This is my first go at the 2017 Pontificis, but I have loved previous vintages of this wine and consider it one of my favorites of the many good value wines at Trader Joe's. It is styled much the same as the $4 and $5 Cotes du Rhones that I enjoyed immensely through the 1990s. To offer such a wine for $6.99, the producer (Badet Clement) has to roam into more out of the way areas of Southern France, but they always seem to find distinctive fruit.

Deep ruby/crimson. Bright and clear. Takes a little while to open. Then red fruit, peppercorn and violets. Very nice. Good grip on the palate but opens up nicely. Boysenberries and more peppercorn. Just what I wanted tonight to go with Middle Eastern food.

Posted by Fred McTaggart at 7:17 PM No comments:

Guigal's Cotes du Rhone has a solid reputation for being reliable and ageworthy. It is always one of the best CDRs on the market. And I remember drinking many bottles from vintages such as 1978, 1983 and 1985 that were drinking beautifully well into their teen years. Nevertheless, this bottle from 2012, a vintage that I have enjoyed numerous times over the past five years, is a distinct disappointment.

The color is a deep ruby, what I expected. But the smells are definitely off. Donna and I were both ready to give it up as corked but I re-corked the bottle and put it back on the shelf just in case. The next night, the off smell was still there but not as strong. And it was not the wet cardboard smell of a corked wine. Nor was it the smell of an oxidized or over-the-hill wine. It was just funky and not in a pleasant way. And the flavors were getting better. On the fourth night, it was still drinkable and the funky smells were displaying a semblance of Syran/Grenache fruit. I am assuming this is just an off bottle

Posted by Fred McTaggart at 6:57 PM No comments:

Leda is the name of the Bosio family's dog who has a reputation for sniffing out the prized (and expensive) truffles from the countryside.The name and the label may be cutesy, but the wine is a very good example of a young Barbera from the Piedmont area of Italy.

Beautiful bright ruby color. And beautiful scents of red raspberries, fresh and tempting. Tannins are silky and there is plenty of acidity to bring you back for sip after sip. The essence of Barbera. While the wine will keep for several years, it is not a wine for aging.

Truffle Hunter Barbera is now available from D&W in Kalamazoo for $10 to $12 a bottle.

Posted by Fred McTaggart at 8:19 PM No comments:

About a decade ago, when 2007 Southern Rhone wines were just hitting the market, I noted a great deal of hype about the vintage. Robert Parker called it "the vintage of a lifetime...a truly historic and profoundly great vintage." Other respected critics such Jancis Robinson (who frequently disagrees with Parker) was also highly impressed with the 2007 Southern Rhones.

At that time, I was buying case quantities of lower level Cotes du Rhones (at the time, many were selling for $50 or $60 a case) and enjoying them nearly every night. From my experience with these lower level wines, I was a bit dubious about the high praise heaped on the 2007 wines. For my taste, the 2005s and 2006s were superior. At this point I was reluctant to call 2007 the vintage of the decade, let alone the vintage of a lifetime. A decade later, I am still holding to my view. The 2005 from one of my favorite estates, Domaine de l'Oratoire Saint Martin Cairanne Prestige is drinking beautifully right now; by comparison, this 2007 seems a bit overdone and slightly over the hill.

Good deep ruby color. Thick crust of sediment. The wine is very aromatic, and I love the fruity/floral scents. Red berries, violets, pepper. Donna is not as impressed; she detects vegetal smells that are not as agreeable to her. (We often differ on our detection of these smells.) In the mouth, the wine is fairly rich but not as rich nor as smooth and balanced as I remember from the 2005 of this same wine. I don't think the rough edges on the 2007 will smooth out with additional time in the bottle, although I could be wrong. At this point, I still prefer the 2005.

This particular bottling of Domaine de l'Oratoire Saint Martin is now known as Les Douyes and sells for $25 to $30 a bottle.When first released, as I remember, the 2005 was about half that price, the 2007 a bit more expensive.

Posted by Fred McTaggart at 4:55 PM No comments:

Chateau Fuisse is arguably the top source for fine Pouilly Fuisse. And Les Clos, the walled vineyard just behind the domaine, has become one of the estate's top selections. It is not a budget wine, but, when I saw this bottle available at auction, I was willing to bid about $25 for the experience of tasting a mature bottle. We were not disappointed.

Posted by Fred McTaggart at 5:00 PM No comments: 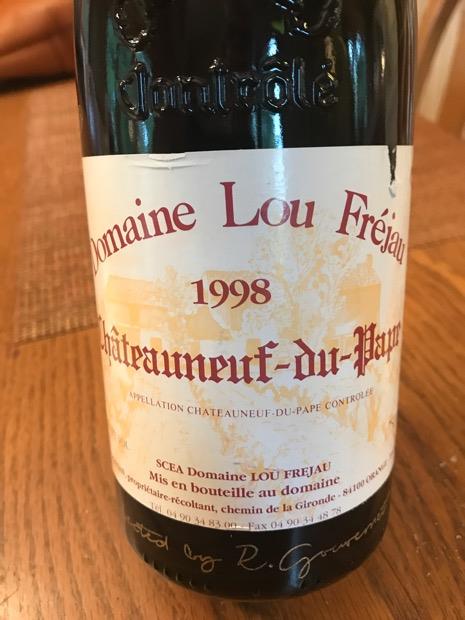 When I think steak, I think Gigondas. When lamb is on the menu, my taste buds crave a mature Chateauneuf du Pape. And this one from Domaine Lou Frejau is a perfect match for grilled lamb chops.

Characteristic mature brick color. Sediment crust in the bottle and some free floating sediment, but it doesn't affect the flavors. Medium intense smells of red berries, leather and Provencal herbs. Perfect. Savory flavors up front followed by a long, ripe finish. Good combination of savory and sweet. Some 1998s have started to fade a bit, but this one is going strong.

Posted by Fred McTaggart at 10:40 PM No comments:

Gigondas is ordinarily a bold wine that develops complexity with 8 to 12 years in the bottle. But drinking one in its youth is an experience in itself, highlighting the wine's unique power and grace. A bargain at $14.99 from Trader Joe's, this Bois de Menge is delightful to drink right now.\

Medium deep ruby. Has the beautiful scents unique to Gigondas--plums, blue flowers, rosemary and thyme. The appellation is only about five miles away from Vacqueyras and less than 50 from Chateauneuf du Pape and the grapes are basically the same; yet each appellation has its own smells and flavors. Power and beauty. When I think Gigondas, I think grilled strip steak, and that's what we're having tonight!

Ripe and rich, fills the mouth with texture and flavor. No new oak influences that I can detect. Although this is a bargain Gigondas, it meets my expectations. I will buy a few more bottles and keep some for later this decade. But I like it right now.

Posted by Fred McTaggart at 4:57 PM No comments: 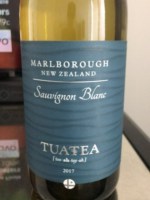 Trader Joe's always has several good New Zealand Sauvignon Blanc wines on the shelf, and this is my favorite. From the first sniff, it displays power and personality. And it goes with a wide range of meal options, including spicy Mexican fajitas from Valentina's in Comstock, MI.
Medium deep yellow. Aromas are slightly influenced by oak but still display distinctive Sauvignon Blanc traits. Grapefruit with subtle passion fruit tones. Same on the palate. Full fruit, dry with powerful acidity. A Trader Joe's bargain at $6.99; for my taste, better than those costing a dollar or two more.
Posted by Fred McTaggart at 1:17 PM No comments: