I pegged this wine as a bit too dark, too dense and too alcoholic for a Ventoux when I tasted it in 2015. Five years later, some positive fruit qualities have emerged but I still find the wine too dark and dense for my taste. Others may like it for the same qualities that turn me away. I love Ventoux, and this is not what I consider a typical Ventoux. Give me an old-fashioned Les Vieilles Fermes (at half the price)!

Deep and dark but no other signs of aging in barriques. More black than red fruits, more Syrah than Grenache and tannins still rule the mid-palate. Underneath, though, some lovely little red berry flavors are emerging.And I love the peppery finish. Maybe it just needs more time? If so, it's too late for me.

Posted by Fred McTaggart at 2:52 PM No comments:

The Italian-American Terlato family is part of the partnership that produced this Piemonte Barbera, and the influence is apparent in the sleek tannins and sophisticated feel of the wine. Yet the grapes clearly come from well selected vineyards in the Piedmont area of Italy.

Medium deep, brilliant crimson. Beautiful Barbera scents of cherries, flowers and a hint of almonds. Fruit flavors are balanced by sleek tannins and bright acidity. Not as lush as a typical New World red, and, as far as I am concerned, that is a plus. The almond tones recur in the medium-long finish. The majority of the grapes for Mazzoni Piemonte Barbera come from Asti and this is apparent in the aroma/flavor profile that is more elegant and less rustic than the Barberas from Alba that are more common on the market. I like the wine but will still go back to my favorites from Barbera d'Alba.
Posted by Fred McTaggart at 10:46 AM No comments: 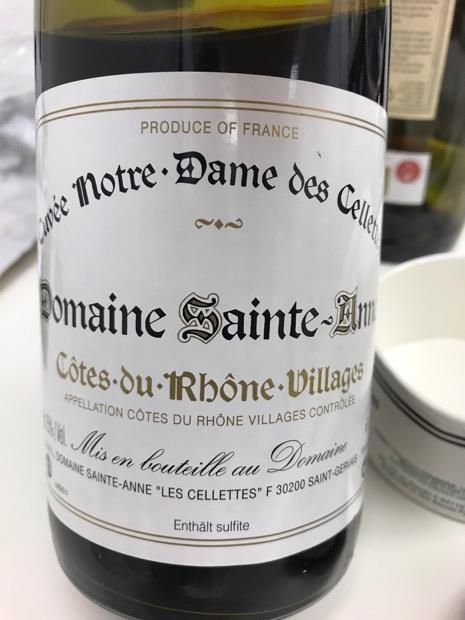 Notre Dame des Cellettes is one step up from the regular Sainte-Anne CDR Villages and one step down from the Mourvedre oriented Saint Gervais (my favorite). Two decades after the vintage date, it is still a very enjoyable wine.

Medium deep crimson. Not much oxidation for a 20-year-old Grenache-based wine. Some sediment remains in the bottle after I decant and that sediment contains a great deal of the tannin that was once in the wine. Very elegant but with good depth of fruit. Grenache berry, Mourvedre violets and savory spice. Strong but not aggressive structure and fruit. Showing better than the 1998 Notre Dame des Cellettes I had last December.

Posted by Fred McTaggart at 7:04 PM No comments:

"Old Butts" refers to the 90-year-old vine butts, gnarled trees similar to those that are common in Gigondas and Chateauneuf du Pape of Southern France. Fluids move slowly from these old butts to the leaves and fruit, contributing to the intense, concentrated flavors of the wine.

Posted by Fred McTaggart at 7:49 PM No comments: 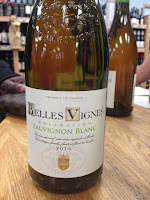 The "beautiful vineyards" that proiduce this wine are not in Sancerre,  Menetou Salon, Anjou nor any other Loire appellation. But it is a French Sauvignon and a good value at $4 to $6 from Trader Joe's.

Expressive nose of gooseberry, passion fruit and citrus. No oak here, and that is a plus for me. I want to enjoy the brisk fruit and acidity of Sauvignon Blanc. This wine is a good choice for pesto or spinach-based dishes.

Posted by Fred McTaggart at 8:33 PM No comments:

Cairanne is my favorite Cotes du Rhone Villages, and Rabasse Charavin is my second favorite estate in that appellatiion, ranking behind Domaine l'Oratoire Saint Martin. It is a blend of Grenache (60 to 70%), Mourvedre (0 to 250%), Syrah (15 to 20%), Counoise and Cinsault grapes planted on clay/limestone soils and aged in enamel and concrete vats. Grenache vineyards were planted from the 1950s to the 1970s, and they clearly play an important role in the personality of the wine.

Deep brilliant ruby. Beautiful aromas of red cherries, berries and spices. Fresh and youthful on the palate. Cloves, cinnamon, a dash of black pepper. Plenty of tannins but the vibrant fruit shows through. This may never become a profound wine, but it is irresistible right now.

Posted by Fred McTaggart at 8:24 PM No comments:

A re-play of my birthday dinner a week ago: lemon and garlic marinated Australian lamb chops with roasted root vegetables. And another well aged wine to confirm the pleasures of late life.

The colors are fading but there is still some deep ruby in the center. Bouquet gives everything I expect from mature Syrah: fresh and dried fruit, intense and lovely. Smooth as silk, rich as velvet. Fruit, grilled meat and tomatoes, a hint of Mediterranean olives. Acid, fruit and tannin in perfect balance with well integrated oak. Long, long finish. One of the best Syrah wines I have ever tasted.

The tag on the bottle reads $9.95; that was before the sale discount at Village Corner in Ann Arbor. This 1979 now sells for more than $100 a bottle, and, even at that price, it is worth it. Of the three mature wines I chose for my birthday (including 1977 Monsanto Chianti Classico and 1989 Janasse Vieilles Vignes Chateauneuf du Pape), this is probably my top pick.


Posted by Fred McTaggart at 7:41 PM No comments:

This is my first experience with a mature Pinot Noir from the Santa Lucia Highlands of California's Central Coast. The wine met my expectations plus plus.

Deep and uncharacteristically dark for a Pinot Noir. Smells and flavors are a bit tightly wound but open nicely with aeration. Bouquet is more floral than North Coast California or Oregon Pinots but deep and complex. Cherry and toasted almond on the palate. Pleasant bitterness that becomes sweeter and more subtle with every sip. I like this wine and will definitely look for more from this producer and this appellation.

Posted by Fred McTaggart at 7:42 PM No comments: 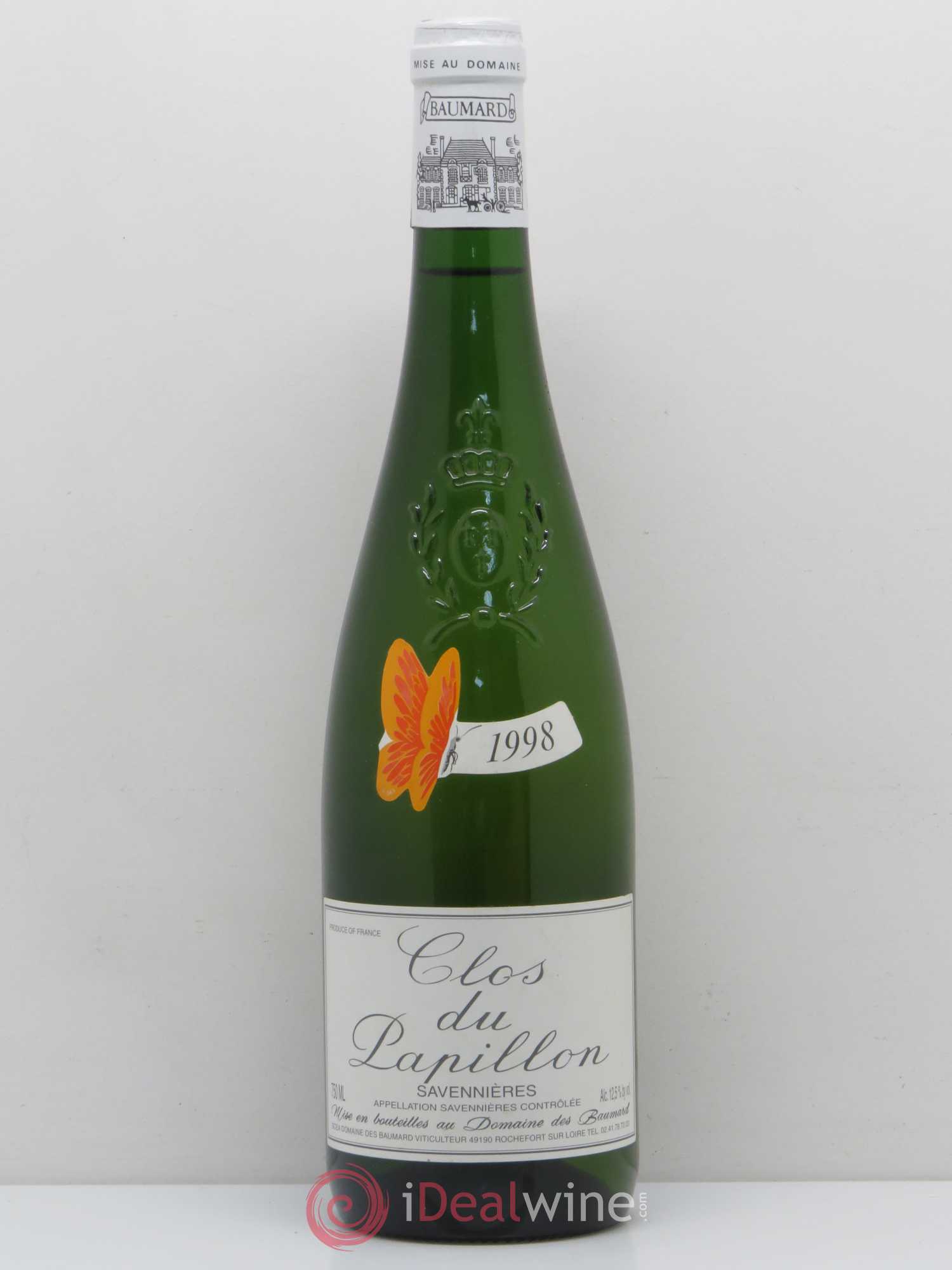 Savennieres from the Loire Valley, with several decades of aging, is a rare treat. and Clos du Papillon (a butterfly-shaped vineyard) produces arguably the best Savennieres. You might say it's the essence of dry Chenin Blanc, one of my favorite white wines. I have had this 35-year-old Clos du Papillon and many of its siblings from the 1970s and 1980s many times over the years and never been disappointed. A bargain through most of the 1980s, the current vintage of Clos du Papillon now sells for about $60 a bottle, well beyond my price point.

Posted by Fred McTaggart at 11:01 PM No comments:

When Trader Joe's began selling this wine many years ago, it was promoted as a Super Piedmontese. And I feel sure it was produced from mostly Nebbiolo grapes. It was a fantastic wine for only $5.99 a bottle. I still have bottle of the 1999 vintage, and it is drinking very well. By the 2008 vintage, the price had gone up to $7.99, and this wine, I believe, is a blend of Nebbiolo, Sangiovese, Cabernet Sauvignon and Montepulciano. Although not as deep and serious as the 1999, it is still a very good wine.

Very deep and dark. More like Montepulciano and Cabernet than Nebbiolo, which typically has more rusty red or orange tones. Very bright aromas: cherries, flowers, spice, black fruits. On the palate, the Nebbiolo is unmistakable. Substance, concentration and clinging tannins. Even at 12 years of age, this $8 wine could use three or more years in the cellar to soften the tannins.

I haven't seen Nerelo del Bastardo in Trader Joe's recently, but it was available in World Market a year or two ago for a slightly higher price.
Posted by Fred McTaggart at 7:28 PM No comments: