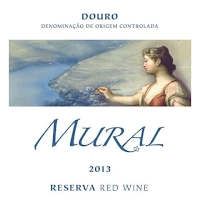 This wine was opened six days ago, then re-corked and re-visited briefly from time to time while we enjoyed a birthday wine and several other more expensive wines from a Tasters' Guild tasting. An $8 purchase from Costco, the Mural Reserva from the Douro region of Portugal took a back seat. But when it was opened again, it certainly did not embarrass itself in comparison to its more prestigious partners. It is inexpensive but certainly not cheap.

Dark color typical of Douro reds. And it also has bold Douro aromas and flavors, particularly on the first night. Yes, this wine has abundant tannins, but they are mostly fruit tannins that frame rather than obscure the fruit. Aromas and flavors both develop beautifully throughout the week. Mostly black fruits with intense spice notes and finally some black pepper tonight. I am disappointed when my glass is finally dry.

The Wine Enthusiast gave Mural Reserva 92 points and ranked it #12 on its yearly Best Buy list. The magazine recommended drinking after 2018, but I am not going to be in any hurry to drink my other bottles.

Posted by Fred McTaggart at 7:19 PM